Working on two films at the same time has brought us all over the world in recent weeks. We have a lot to tell you! First, we're excited to announce the release of our crowdfunding campaign for our new film, Where There Is Darkness, about a beloved Catholic priest who fights from beyond the grave to save his killer's life.

Supporters get free gifts that can't be found anywhere else.

And, second, we have a new update about the other film we're working on... Post-production and some final shooting for Cross Mountain has kept us very busy, but we think the movie is shaping up to be even more powerful than Apparition Hill.

We've spent the last several weeks in Medjugorje, in part following up with one of the cast members of the film.

We'll release Cross Mountain as soon as it's complete, but first we have to film several upcoming events which will comrpise the end of the movie.

One of these final shoots will be in Rome, when one of the seven young people we brought to Medjugorje for Cross Mountain will be ordained. Another will be a very special wedding this summer. And we also have plans to interview Fr. Jozo.

WHERE THERE IS DARKNESS 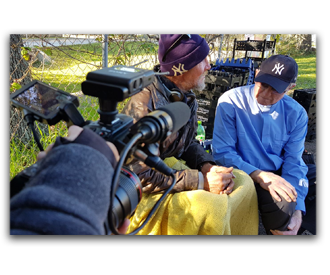 After we released Apparition Hill in theaters, we discovered the story of Fr. Rene Robert, a Catholic priest living in St. Augustine, Florida.

Described by many as a living saint, Fr. Rene ministered to the area's deaf, poor, and people recently released from prison.

Fr. Rene also went to Medjugorje on pilgrimage several times and had a strong devotion to the Blessed Mother.

But sadly, in April of 2016, Fr. Rene was kidnapped and murdered by Steven Murray, a troubled young man he had been trying to help.

Prosecutors announced they would seek the death penalty for Murray, but then came a plea for mercy from the last person anyone expected... Fr. Rene himself.

We urgently need your help to complete Where There Is Darkness. Please claim your free gifts by supporting the film at INDIEGOGO and WATCH THE PREVIEW.

Stella Mar Films needs your help to complete this important movie and get it out to the world. Please consider supporting our fundraising campaign through one of the following ways:

Crowdfunding with free gifts for donors